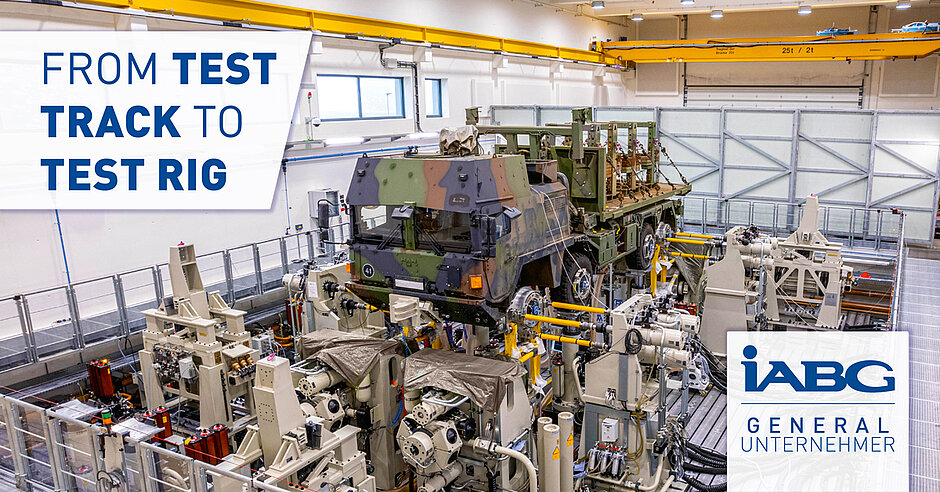 The largest test system to date for qualifying wheeled military vehicles of the German armed forces is located on the premises of the Wehrtechnische Dienststelle WTD 41 in Trier. The test bench is designed for vehicles with a total mass of up to 45 tons. This goes far beyond what comparable test rigs in the civilian automotive or commercial vehicle sector are currently capable of. MAXI can be configured for the operation of vehicles with up to four axles as well as for parallel operation for two two-axle vehicles.

As general contractor, IABG was responsible for this challenging project - from the conception to the systems engineering to the implementation of the highly complex test bench. With the successful handover to the customer, the project is now complete. The fact that this was achieved "in time, budget, and quality" fills everyone involved with great pride.

The MAXI example illustrates our ambition "From Test Track to Test Rig": Tens of thousands of kilometers that previously had to be driven off-road in real life for driver testing can now be reproduced much faster on the test rig, even in 24/7 operation. What often takes several months off-road, the test rig accomplishes in just a few days or weeks. Since the influences of drivers, weather conditions and erosion of the natural tracks are eliminated, the reproducibility of the driving tests is significantly increased. This also makes a laboratory-like cause-and-effect analysis possible.

In October 2021, the installation of the first test specimen started, followed by operational load tests. At the end of this extremely intensive testing, the overall acceptance test was carried out by the German armed forces.